Today, (June 29), the makers of Ranbir Kapoor's ‘Shamshera' have released a new song titled, ‘Ji Huzoor' from the film.

The song features Ranbir Kapoor showing off his exceedingly energetic dancing skills as he plays with children and jumps from heights.

The power-packed track is crooned by Aditya Narayan and Shadab Faridi. It is composed and written by Mithoon.

The film production house Yash Raj Films shared the YouTube link of the song ‘Ji Huzoor' and wrote, “You wanted to dance with Ranbir & we said #JiHuzoor Shamshera releasing in Hindi, Tamil & Telugu. Celebrate #Shamshera with #YRF50 only at a theatre near you on 22nd July (sic).”

You wanted to dance with Ranbir & we said #JiHuzoor 🕺 https://t.co/6OEHs5b7rj
Shamshera releasing in Hindi, Tamil & Telugu. Celebrate #Shamshera with #YRF50 only at a theatre near you on 22nd July. pic.twitter.com/narcfP62em

As per the report, the film is set in the fictitious city of Kaza, where a warrior tribe is imprisoned, enslaved, and tortured by a ruthless authoritarian Daroga Shudh Singh played by Sanjay Dutt. This is the story of a man who became a slave, a slave who became a leader, and then a legend for his tribe.

Directed by Karan Malhotra, the film stars Ranbir Kapoor, Vaani Kapoor, and Sanjay Dutt in lead roles. Produced by Aditya Chopra, ‘Shamshera' is set to release in Hindi, Tamil, and Telugu on July 22.

Catherine Zeta-Jones snaps at her family a lot

Why Ellie Goulding was cynical about marriage 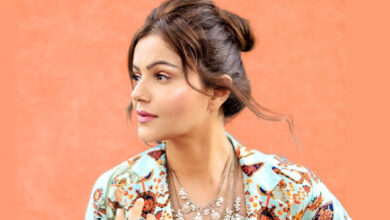