Tollywood star Nani has teamed up with director Srikanth Odela for a new project titled ‘Dasara'. The film has launched today with a Pooja ceremony in Hyderabad attended by Sukumar, Tirumala Kishore, Venu Udugula, and Sarath Mandava. Actress Keerthy Suresh will be playing the leading lady in the film opposite Nani. The shooting of the movie will start in March.

As per the report, popular Malayalam actor Roshan Mathew will play a very crucial role in the film. ‘Dasara' is a rural entertainer set in the village situated in Sigareni Coal Mines in Godavarikhani, Andhra Pradesh. Nani will play a mass and action-packed role in the film. Apart from Nani and Keerthy Suresh, the film also features Samuthirakani, Sai Kumar, and Zarina Wahab, among others.

The film will have music by Santhosh Narayanan with Sathyan Sooryan ISC handling cinematography. Sudhakar Cherukuri is producing the film under his Sri Lakshmi Venkateswara Cinemas (SLVC) banner.

On the work front, Nani recently wrapped up the shooting of ‘Ante Sundaraniki'. It will release this summer.

Malaika shares glimpse of her building being sanitised 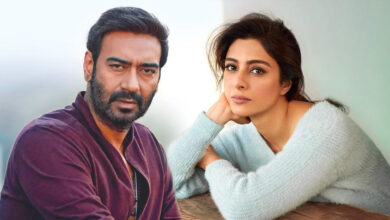 Ajay Devgn and Tabu wrap up the shoot of ‘Bholaa’, shares a new pic

Why Covid-struck Malaika is heartbroken