London, June 8 (IANS) Singer Leona Lewis has shared her experience with a racist shop assistant, and said racism is a problem in the UK too.

Talking about the incident that took place almost a decade ago, the singer said she was told “not to touch” anything while she browsed items in a West London high street shop with her father.

Leona said she felt inspired to share her story after hearing people say racism was not as much a problem in the UK as it is in the US, reports mirror.co.uk.

“A few years ago, my dad and I were on a high street in London,” she said in the video posted on her Instagram.

“At the time, my management company was in Fulham, so we were walking around the area after a meeting.

“I didn't realise at the time that all of the other customers were white. Me and my dad were the only black people.”

The singer said she noticed a shop assistant “hovering” around them before warning them not to touch the items.

“She came up to my dad and I and said, ‘You need to put that stuff down, you're not allowed to touch it.”

“Why do we have to put stuff down? We're just looking at it, I'm probably going to buy it.'”

When Leona refused to put the items down the shop assistant asked her to leave and threatened to call the police.

Leona said she felt so angry about what was happening that it “sparked a rage in me. I started saying, ‘No, I'm not going to put it down, I'm going to buy it. Why are you targeting us?

“(By now it was just) me, this woman, and my dad in the store. And… she became really defensive, really agitated, and ran behind the counter. She said she was going to call the police on us if we didn't leave the store now.

“I couldn't calm down because I was so angry,” said Leona.

“I knew what this woman was doing to us. But my dad has been in positions like this before and he knew that I needed to make myself smaller. And that just enraged me even more.”

Leona said when she returned to her car she cried.

The singer said her father returned to the store with one of his daughter's CDs to show who she was.

The shop assistant then followed him back to the car where Leona was crying to apologise for her behaviour.

“I confronted her and said, ‘You're racist. You're a racist. You targeted me and my dad, you wanted to throw us out of the store because we're black. You're racist'.”

Leona continued: “When people in the UK are saying that racism isn't a problem here, it is a problem. It's a big problem.” 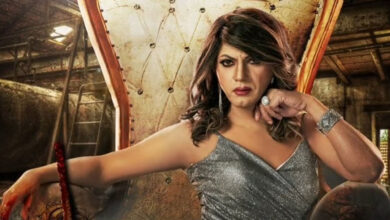 Akshay Oberoi: Negative roles are fun because they have no limitations