On Wednesday, the makers of Janhvi Kapoor’s upcoming movie ‘Mili' unveiled the first look poster and teaser on social media. Directed by Mathukutty Xavier, the film also stars Manoj Pahwa and Sunny Kaushal in pivotal roles. The film is produced by her father and veteran film producer Boney Kapoor, under the banner Bayview Projects.

Taking to Twitter, Producer Boney Kapoor share the teaser of ‘Mili' and wrote, “DYING TO SURVIVE! HERE IS THE FIRST LOOK OF #MILI RELEASING IN CINEMAS ON 4TH NOVEMBER (sic).”

DYING TO SURVIVE! HERE IS THE FIRST LOOK OF #MILI

RELEASING IN CINEMAS ON 4TH NOVEMBER

In the teaser, we see Janhvi’s Mili struggling to survive in a room with sub-zero temperatures. Her face and her nails are bruised while she tries different ways to let herself out. We also get a glimpse of Sunny Kaushal in the teaser, who looks tensed as he rides a motorcycle.

In the upcoming film, Janhvi Kapoor plays the role of a nurse. A few hours ago, Boney Kapoor shared the first-look poster of the film that showed her as 24-year-old Mili Naudiyal. She looked cheerful, and in the caption, her father Boney wrote that “IN ONE HOUR HER LIFE WILL CHANGE! #mili (sic).”

After an hour, Janhvi's father also dropped yet another poster, which had a completely opposite look. The second poster showed her stuck in a freezer, with red marks on her face from the cold. “Frozen but not shaken,” read the text on the poster.

‘Mili' is a survival thriller and is the official Hindi remake of the 2019 Malayalam film Helen, starring Anna Ben in the titular role.  ‘Mili' is scheduled to release on November 4, 2022.

Ayushmann: Overwhelming to know my films are being remade in South 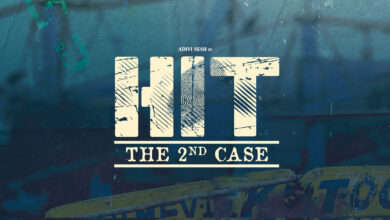