After much delay, Tollywood star Allu Arjun is finally started shooting for his upcoming film, ‘Pushpa 2'. Cinematographer Miroslaw Kuba Brozek recently broke the news to fans by sharing a photo from the upcoming film’s set on Instagram. On Sunday, October 30, Miroslaw posted a picture with Allu Arjun, in which he’s seen giving some instructions to the actor.

In the picture, the 40-year-old actor sported an intense look in a solid white t-shirt with a well-kempt hairdo and a full-grown beard. “adventure has begun … thanks to IconStar #Movie #Pushpa #alluarjunonline #ThaggedheLe #aryasukku #mythrimoviemakers #pushpa #pushpatherule” read the caption of Miroslaw Kuba Brozek’s Instagram post.

Earlier, in August the makers shared an announcement poster to reveal that ‘Pushpa 2' is all set to start filming.

‘Pushpa: The Rise’, an action entertainer directed by Sukumar, was released in theatres on December 17 and has been widely praised. It has been produced by Naveen Yerneni and Y Ravi Shankar of Mythri Movie Makers in association with Muttamsetty Media.

However, after Pushpa: The Rise, Allu Arjun has not confirmed his next film yet.

Priyanka Chopra tells Malala: Your degree from Oxford is such an achievement

ED finds no big transfers between SSR and Rhea’s accounts 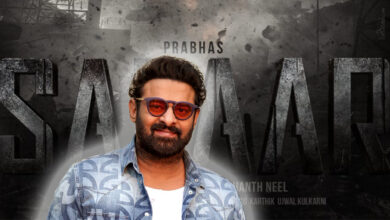 Special announcement of Prabhas’ ‘Salaar’ to be unveiled on Independence Day

Bhumi Pednekar gets together with Smriti Irani, shares a selfie