South Indian actor Prabhas and Pooja Hegde starrer the upcoming romantic film Radhe Shyam will be released this year. However, before going to release the film teaser people have made it trending on Twitter with #RadheShyamTeaser.

Radhe Shyam, directed by ‘Jil' Radha Krishna Kumar, is a romantic drama that revolves around the journey of two people from different backgrounds. It has been shot across various exotic locations and is likely to appeal to the international audience.

The team of Radhe Shyam recently returned to Hyderabad after successfully completing the Italy shoot schedule of the film.

The filmmaker ‘Jil' Radha Krishna Kumar was tweeted on 1st January about the film.

According to the Twitter source, the teaser to be released on January 14.

The original Telugu movie will release in theatres in 2021 in Tamil, Kannada, Malayalam, and Hindi.

Did you know Roopal Tyagi and Amitt K Singh have pet names for each other? 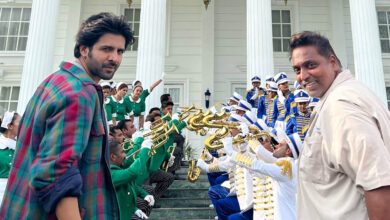 Kartik Aaryan and Ganesh Acharya start shooting for a song for ‘Shehzada’, see the pic