Bollywood actress Shraddha Kapoor returned to Mumbai after being in Mauritius for over a month now. She was shooting alongside Ranbir Kapoor for her upcoming movie which is to be directed by Luv Ranjan.

In a late-night story that she uploaded on her Instagram account, she is seen as tired but really happy to be on her way back home. She wrote, “Home sweet home after 32 days”.

At the airport, while arriving, she was caught on camera by the paparazzi. Shraddha was in a complete formal look with a white shirt under a chic blue jacket with black trousers pants. She also carried a beige purse. Her sunglasses added to the look making it more chic and trendy.

Apart from them, the Luv Ranjan directorial will also feature Boney Kapoor and Dimple Kapadia in key roles. The untitled film is slated to release on March 8, 2023. 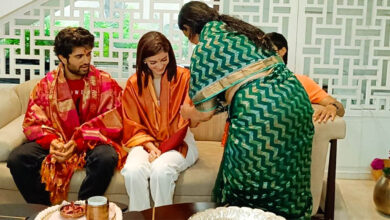