Bollywood actor Anupam Kher who was last seen in the blockbuster film ‘The Kashmir Files' now wrapped up his upcoming project, titled, ‘The Signature'. On Monday, taking to his social media handles, he confirmed the news, and shared the first look poster of the film ‘The Signature’.

Sharing the first look poster he captioned the post, “FIRST LOOK POSTER: Happy to share that we have wrapped the shooting of our movie #TheSignature produced by #KCBokadia and directed by national award winning director #GajendraAhire. The film is co-produced by #AnupamKherStudio. #MahimaChaudhry @annukapoor_ @RanvirShorie.”

In the picture, he is seen as an office-going old man, looking tired as he is about to cross the road, while holding a bag on his left shoulder and an umbrella in the other hand.

The actor had earlier announced The Signature is his 525th film, and also stars Mahima Chaudhry. The film is directed by National Award-winning filmmaker Gajendra Ahire and produced by KC Bokadia. It is billed as a touching story of a common man. It also stars Ranvir Shorey, Neena Kulkarni, Manoj Joshi, and Sneha Paul. 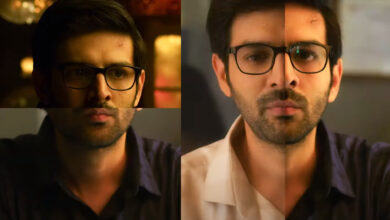 Kartik Aaryan starrer Freddy Teaser is out, film to be premiere on Disney+ Hotstar